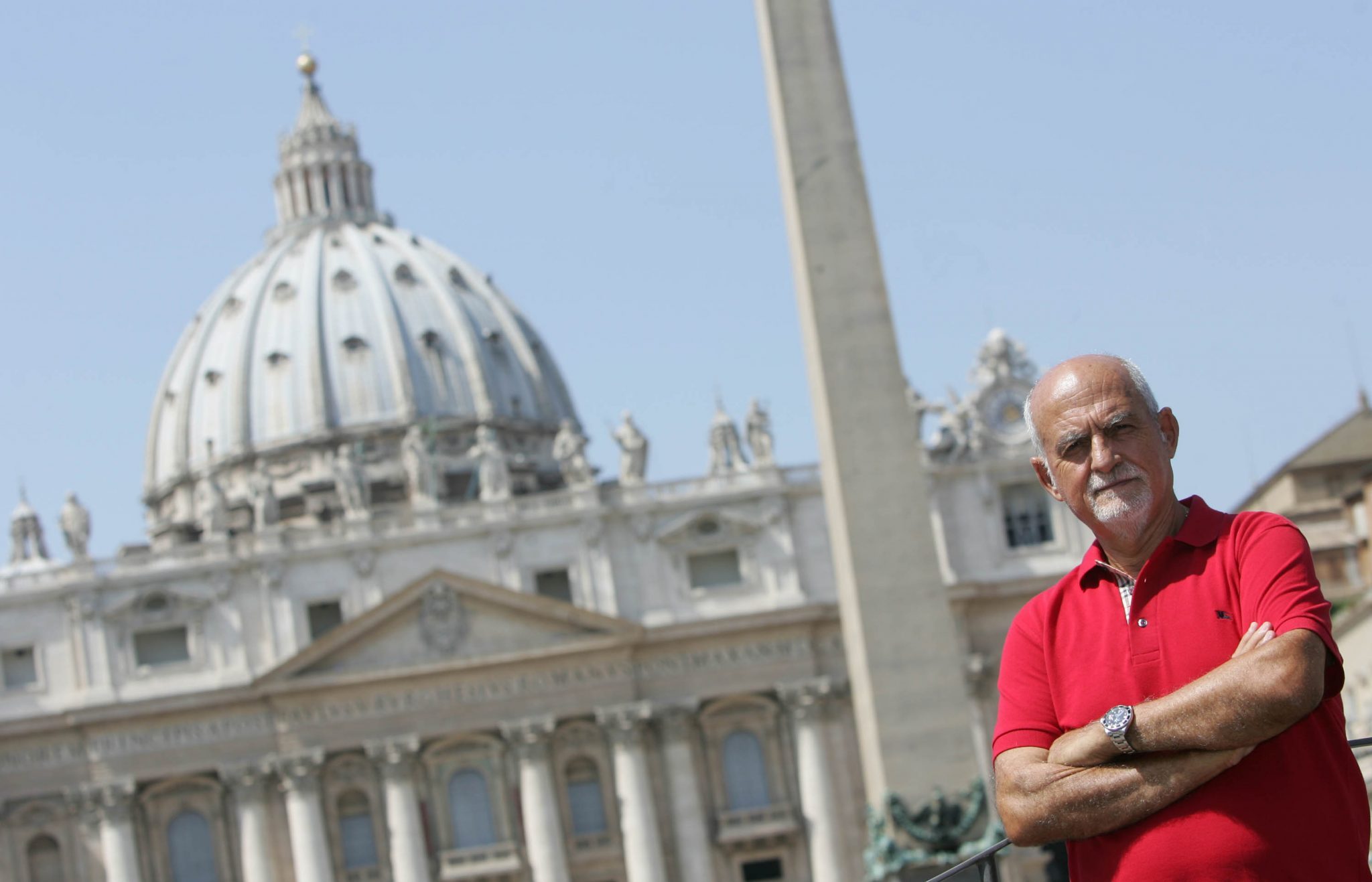 Who is Alessandro Romano

Alessandro Romano is an internationally renowned sculptor, born in Rome on July 26, 1944. Educated in the art shop according to the glorious Italian tradition, after a debut in painting, he expressed in his sculpture his figurative talent, with results of extraordinary plastic and dynamic strength. In his works, mythological and religious inspiration are combined while expressing the anxieties of modernity, giving rise to a classical and new form, touched profoundly by movement and measure.

The works in progress and the latest exhibitions

At present, some of Alessandro Romano’s latest works are visible in the Contemporary Art exhibition that is taking place in Marina di Pietrasanta, which will continue until the end of October.

In the latest international event participated by the Master, L ‘ART EXPO NEW YORK held at PIER 94 in New York past April. Alessandro Romano was given the award for “BEST SCULPTOR“, among all the artists and the galleries that participated in the event in 2017.

Amongst Maestro Alessandro Romano recently completed works is the new “La Croce Spezzata“, placed amongst the Treasury in Saint Peters Basilica in the Vatican.

The piece puts forward for all to see a new crucifixion icon in front of which you can not remain indifferent, a work that brings out all the suffering and pain that Jesus Christ suffered with this terrible death.

The sculpture inspired the start of a great project that saw the creation of a series of three-meter sculptures. Works created and dedicated to the “Via Dolorosa“, which tell the story of Jesus from the Gethsemane to the Resurrection. A great work of which the terracotta sketches were recently just finished.

The images of these sketches were chosen by the Vatican, as modern icons of the suffering of Jesus Christ and put on display for the world to see in the last Way of the Cross, led by Pope Francis in 2017.

For FAO and the Italian Ministry of Health, on the occasion of the “Eradication of Pest Bovine“, he created a bronze stele. The work illustrates the path that led to this extraordinary victory. An extraordinary example of the importance of having a serene, lucid and forward-looking co-operation among peoples to try to resolve the evils affecting humanity.

For the Dante Alighieri Society of Reggio Emilia, he has created a memorial to the “young teacher in Italy”. Extraordinary women who have contributed with the constant and determined teaching of the true and misunderstood history of unity of Italy. Sometimes even at the expense of their own lives.

On the occasion of the celebration of the fiftieth anniversary of the death of “S. Camillo de Lellis“, the Master wins the contest for the creation of the new monument for the relics of the saint. His cross bent over as a support to help others is the road leading to the creation of the work. Two sculptural groups embodying the charisms of the holy place at the base where the urn is located with the relics, support a rainbow of light composed by the folded crosses. This is an eloquent example that shows us the way to salvation. Today, the work is visible in the Maddalena church at the Pantheon in Rome.

For the publisher Vydia, on the occasion of the twentieth birthday of St. Paul, the Master illustrated a prestigious volume, “Paulus” with limited circulation. This is a great work dedicated to the Apostle of the Gentiles. Twenty-five tables, in which are depicted the salient moments of life and the preaching of this extraordinary Saint. On the front cover, a gilded bronze bas-relief in which Alexander the Great, stigmatised what took place on the road to Damascus.

The great works in the Vatican

The year 2004 marks an extraordinary moment in the artistic life of the maestro Alessandro Romano. It is in fact on this date that it is commissioned to realize four monumental carvings of Carrara white marble, about six meters high, devoted to four saints of the modern age. Once realized, all the works will be placed in the niches of the Papal Basilica of Saint Peter in the Vatican. For each placement, a ceremony was organized with the blessing of the works.

Santa Teresa Jornet Ibars is in the niche number ten, outside the apse of St. Peter’s Basilica. The statue of the saint, was blessed by H.H. Saint. John Paul II in 2004. With his left hand the saint invites the man to the cross and with his right arm he supports the lame woman.

In the eleven niche was placed St. Genoveffa Torres Morales. An extraordinary woman who, despite her infirmity, was not afraid to immerse herself in the smell of the most serious poverty, to help older women in distress.

In the niche number thirteen you will come across St. Giuseppe Manyanet, who embodies the parable of the holy family.

Finally, in 2008, the statue in the niche number seventeen Don Orione. The little saint he had in his daily life impossible. Bread and gospel he used to say, the Lord does the rest.

The blessing for each of the three works is of H. H. Pope Emeritus Benedict XVI.

For this extraordinary work Alessandro Romano was invited to represent, as the best contemporary sculptor, the Vatican State at “The 18th China Changchun International Sculpture Symposium”.

The beginnings of the new millennium

For Easter in the holy year 2001, Alessandro Romano built a large “Easter candle” made of polychrome bronze for the Pietramontecorvino church surrounded by an almond light of the Holy Sepulcher, now empty after the resurrection of our Lord, inviting us to rejoice for this extraordinary event.

On the occasion of the great Jubilee dedicated to catechists and religious teachers, on 10 December 2000, in the Paul VI Hall, a testimony on the Contemporary Sacred Art was invoked by the Holy See.

Alessandro Romano is also the author of other important works of Sacred Art such as ambones, tabernacles, via Crucis and others, placed inside and outside churches and ecclesiastical institutes.

For the necklace titled “The Texts of Consciousness” (Art. Ed.), He illustrated the “Confessions” of St. Augustine”, with the comment of Professor Vincenzo Cappelletti.

Special importance is given by the Maestro in the production of Sacred Art for portals of churches and basilicas. For these works, Alessandro Romano, who prefers great unitary scenes, goes deeply into the theological theme each time to achieve extraordinary results for content and images.

On behalf of the Diocese of Piano di Sorrento, he realized the great triptych of “Janua MM” bronze portals dedicated to SS. Trinity. The gaze comes from the archangels of the side doors, then proceeding through all the angelic choruses, until reaching the central door of Trinitarian Grace.

For the Order of the Benedictines in August of the year 2000, after renovating the square, he placed a large bronze sculpture dedicated to “S. Blessed”. A monument that captures the nineteen-year-old Saint in a prophetic attitude toward the Sacred Spec invoked by the wind of Grace.

Further back in time

Many works by Alessandro Romano must be noted such as “Sacred Love and Profane Love” in Antwerp; The monuments dedicated to “Falcone e Borsellino”, “Resurrezione” in Caltanissetta; A large fountain dedicated to the “signs of the zodiac” in Torrenova; The allegories, “The Birth”, “Life” and “Death” in Rhodes, the great monument dedicated to Don Sturzo in Caltagirone.

Special mention deserves the monumental work inspired by the famous myth Iliad polychrome bronze, “the Shield of Achilles”, acquired by the National Gallery of Modern Art in Rome to the Quirinale Palace.

His works appear in the most important public and private collections in the United States and Europe.

Finally to conclude, one should mention the great “Medusa”, a large head which depicts the great mythological character just beheaded. The work measures 3.50 meters tall, made in bronze and is part of a prestigious collection in Monte Carlo.