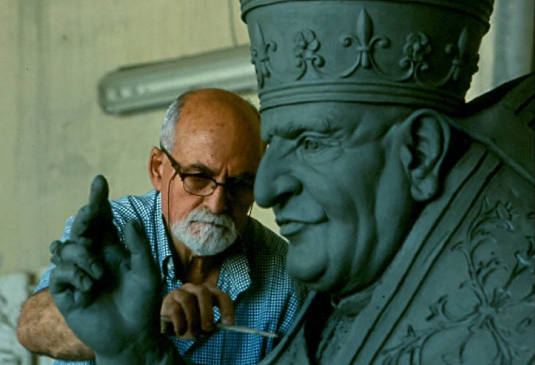 Alessandro Romano is one of our best-known and most significant sculptors today. This alone already deserves an explanation, considering that if there has been a form of art in and of itself depressed in the last part of the twentieth century, it has been sculpture.

Whereas in the first half of the twentieth century, sculpture kept pace with the most important artistic experiences of the time, going through the many stages of the avant-garde, of the return to order, and of the new avant-garde movements that arose around the middle of the century, it was instead characterized in the second half of the century by a progressive lack of attention on the part of the public and by a lack of commitment on the part of the creative artists.

Though it is difficult to explain such a phenomenon, it is particularly important to highlight it when one attempts to analyze and illustrate the long and complex course of a sculptor such as Alessandro Romano, whose personality abounds with implications and experiences, and who has drawn from a vast and thoroughly metabolized classical culture, while at the same time being an acute and aware connoisseur of the amazing linguistic evolution of his art.

It should thus be mentioned how Alessandro Romano’s art originated in a cultural climate typical of the last thirty years of the twentieth century, addressed towards an audacious return to the past, which at the moment of its formulation encountered vivacious polemics, memorable disputes, enthusiasms, and forms of denigration. In that initial period, the position of Alessandro Romano was simultaneously problematical and straightforward. Devoted to classical form, he spontaneously shared the line of thought that originated in the debates concerning

postmodernism and so-called “weak thought”, and tended in the area of the figurative arts to affirm a sort of “Time block”, a freezing of the fateful and inevitable historical dialectic, in favor of a doctrinal hypothesis that identified a very precise moment in history as a point of reference regarding the creation of a work of art. Although totally remote from our era and perhaps from our sensibility, such a point of reference was proclaimed as exemplary and everlasting, from both a critical and a creative point of view. It must be said that Alessandro Romano never adhered in an abstract and preconceived way to any actual “movement”, but instead moved in accordance with the experiences of some of his contemporaries and illustrious fellow artists who were particularly interested on the dual plane of creation and meditation. Some of Alessandro Romano’s first works, in fact, already attested to a position that was different from that of the others. While many preached a return to the trade and to the craftsmanlike aptitudes of artistic creation, Alessandro Romano followed through with accomplishing it seriously and spontaneously without too many theories, often giving sublime proof of his capacity for the modeling of the material,

the elaboration of the form, and the  expressive commitment obviously connected with the great experiences of the past but alien from their direct citation or too explicit reference.

Anyone familiar with the history of art certainly had no difficulty in ascertaining in the language of Alessandro Romano many suggestions and ideas clearly connected with the great Baroque plastic art and the memorable virtuosity of many craftsmen of the past. But, as sometimes happens, this overflow of capabilities could have translated into a negative result for the artist. He was good, and perhaps for some too good, with the risk of exposing him to the facile criticism of having an extraordinary and indisputable skill disjoined from a real creative necessity. To tell the truth, his dedication to art and his love of it have always been so evident and so avowed by the maestro that no one has ever really thought of a criticism of this kind, although there is no doubt that his natural talent united with a firm training of the hand has exposed and perhaps still exposes Alessandro Romano to envy and to forms of emulation not always generous and noble. On the other hand, however, this grandiose and magniloquent dimension was present from the beginning in the maestro’s spontaneous creativity, and it has remained with him always, allowing him to focus his true and profound nature very early and enabling him to add a relevant word to the great debate on the sense and destiny of the art of sculpture in itself, once again today alive and prolific. Thus in the last twenty years there has occurred a phenomenon of which Alessandro Romano himself can to all effects claim to be the protagonist. The art of sculpture, which had diminished in quality and interest, has become the leading art of our time, seeing that the general orientation has by now turned to that particular dimension now popularly referred to as “ installation”. This term is now used to include a myriad of phenomena that are totally different one from the other, but this is the fact. By now our attention is called only to works of art that are denominated “installations”. It seems almost to be the magic formula for convincing us all that the canonical articulation of the arts consisting of architecture, painting, sculpture, and decorative arts, as thought of for centuries, has been definitively lost. The installation is that which goes beyond and is therefore the modern art par excellence. It is the guarantee of the result and of the main, if not the only, purpose of the contemporary artist: to live, as is moreover inviolable, one’s own time and to interpret it in keeping with the needs of the new public and new experts. Except for the fact that the installation is, for the most part, none other than the physical and conceptual amplification of the art of sculpture, even if the forms are incommensurably different from those of the past. Sculpture is the art that determines the trends of even the most reckless and audacious installation, and the structure of so many aspects of contemporary art falls within the territory of the sculptural dimension, whether it regards fashion, cinema, publicity, or the domain of television. In the theoretical area, however, this aspect has never been fully acknowledged, and the experience of Alessandro Romano has developed with his having always in mind, on a conscious and also unconscious level, this torment that is typical of our time.

As has been observed, Romano is a hyperbolic and grandiose author, but when one goes beyond the superficial level, one well understands why. Because in the exaltation of his professionalism itself, in the commitment at the same time ethical and aesthetic that has led him to achieve magnificent public works just as so many ancients had before him, in the pride of an impetuous creativity laden with matter, the artist has brought his unique and decisive contribution to a question such as that of the “dominion” of sculpture in our Time. This has established him as a personality that does not hesitate with respect to the peremptory affirmation of his ideas, but on the contrary draws its greatness precisely from this kind of courage of creation, of which today we can not so much weigh the pros and cons as instead attempt a fine-tuning. There is a kind of inner need of verification and comparison that induces the critic and the artist himself to measure themselves now with the monographic dimension, in that Alessandro Roman has undoubtedly gone through a series of stages and moments that totally justify his being seen as a central figure of a crucial debate for the aesthetic consciousness of our Time. A generous and expert artist, spontaneous and deeply meditative, Alessandro Romano can thus be proclaimed an emblematic figure who lives today with a yearning for antiquity that is more mental than factual. His resurrection of the classical myth, often present in numerous works, is not a retracing of others’ footsteps, but rather a recreation. It is as though Romano had immersed himself in a space and a time that are located at a perennial distance not referable to any precise moment of the past, but which have instead lain dormant in the memory of each one of us. It is the true classicism, eternal and inalienable, which has characterized all the history of Italian art and of which there is nothing to be neglected. Today the maestro has taken on a relevant role. Prestigious commissions and a wide range of international experiences have placed him in a position that appears clearly and will do so even more in this book’s pages, which are at the same time a tribute to him and a fine-tuning of an entire chapter of contemporary Italian art history, fervid and rich as it was in the past, but to be examined perhaps with a particularly mindful attention and critical sense, considering the innumerable solicitations that reach the eye of the public without always reflecting their proclaimed merits.